Wikipedia is there when you need it — now it needs you.
Donate Now »
[Expand]
Support Wikipedia: a non-profit project.
Donate Now »
Canada at the 2008 Summer Olympics

From Wikipedia, the free encyclopedia

Jump to: navigation, search
Canada at the Olympic GamesAt the 2008 Summer Olympics in BeijingCompetitorsFlag bearerSummer GamesWinter Games Canada, which is represented by the Canadian Olympic Committee (COC), competed at the 2008 Summer Olympics in Beijing, People's Republic of China from August 8 to 24, 2008. Canadian athletes have competed in every Summer Olympic Games since 1900, except the 1980 Summer Olympics which they boycotted. Canada sent 332 athletes in 25 of 28 sports, the seventh largest team at the games and Canada's largest since 1988.[2] Canada did not send a team in handball, volleyball or basketball.[3] Kayaker and 2004 Summer Olympics gold medalist Adam van Koeverden was the flag bearer at the opening ceremonies; Karen Cockburn bore the flag at the closing.[1][4]
The COC had set a goal of finishing in the top 16 in total medals[5]; at the 2004 Summer Olympics, Canada finished 19th. Canada finished 19th in gold medals and 14th in total medals in Beijing.[6] Equestrian show jumper Ian Millar competed at his ninth Summer Olympics, tying the record set by Hubert Raudaschl. He has been named to ten straight Olympic teams, but did not compete at the 1980 Summer Olympics due to the Canadian boycott.[7] For the first time, Canadian athletes were paid for medals earned. Gold medalists earned $20,000; silver medalists were paid $15,000; and bronze medalists $10,000. A total of $515,000 from the Athlete Excellence Fund was given to the medal winning athletes.[8]
Canada will be the next host of an Olympics, when Vancouver hosts the 2010 Winter Olympics.
//

Main article: Athletics at the 2008 Summer Olympics
Previous world champion hurdler Perdita Felicien officially announced on July 14 that she would not compete. This followed a foot fracture sustained during a February training session.[12] 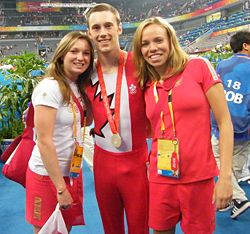 Main article: Swimming at the 2008 Summer Olympics
The places in Canada's Olympic swim team were allocated at the 2008 CN Olympic Trials.[36]

Retrieved from "http://en.wikipedia.org/wiki/Canada_at_the_2008_Summer_Olympics"
Categories: Nations at the 2008 Summer Olympics | Canada at the Olympics | 2008 in Canada
Views